Today’s Sun (artificially-colored in purple) seen at the... 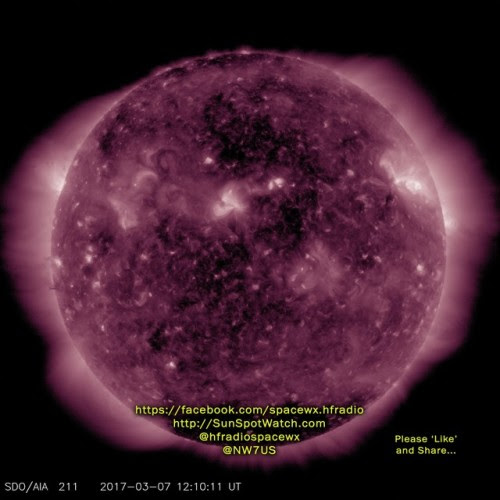 Today’s Sun (artificially-colored in purple) seen at the 211-angstrom wavelength (Extreme Ultraviolet, or EUV), as viewed by the Solar Dynamics Observatory (SDO), by the Atmospheric Imaging Assembly (AIA).

At this wavelength, at a wavelength not seen by the un-aided eye, we observe this full-disk AIA image through the 21.1 nm (211 A) filter. This Extreme Ultraviolet (EUV) waveband is used to monitor active regions in the solar corona.

The image is a ‘false color image’, meaning that observed data are in a range outside of what human eyes can see, so the data are digitally recast into colors that emphasize physically important features. This view is created from data gathered by the Solar Dynamics Observatory (SDO) satellite that flies above Earth’s atmosphere in an inclined geosynchronous orbit.

Emissions captured in this image come from iron (Fe), a trace element in the solar atmosphere that emits Extreme Ultraviolet (EUV) light when heated to temperatures in excess of one million deg K. In the solar corona the temperatures are so high that most chemical elements have lost many of their electrons. Some of the remaining electrons still attached to the atom emit EUV radiation in narrow wavebands or lines.

The 21.1 nm filter (also called channel or bandpass) is dominated by emissions from highly ionized iron: 13 times ionized (missing 13 electrons) iron–Fe XIV. Other ionization levels of iron also contribute. The roman numeral descriptors are consistent with spectral notation: the level of ionization for a given roman numeral is one unit larger that the actual number of missing electrons. Additionally there may be some contribution from hot thermal plasma when solar flares are present. The temperatures associated with this level of ionization is about 2 x 10^6 K.

With this image, we can monitore active regions.